It’s only May, yet I find myself looking at desert mule deer photo, staring at the two mule deer mounts in my office and yearning for later this fall when I will again be able to pursue the big-eared, stotting-gated “Deer of the West”.  Actually it’s a yearning that never leaves my thoughts.

Rather difficult to articulate exactly why I have a fascination with this deer species.   Maybe it’s the fact I love the cactus and thornbrush mountains and valleys of the high desert where those of the Odocoileus heminous crooki species make their home.  Maybe it stems from having in recent years all too infrequently pursued the deer I find fascinating.

In years past I hunted desert mule deer every chance I had, especially hunting with Greg Simons and his Wildlife Systems (www.wildlifesystems.com).  Some of those hunts were truly epic, such as the three-mile stalk Greg and I did, making like snakes crawling on our bellies past truly tempting bucks, then inching to within feet of the buck we were after and shooting him in his bed.

Hunting with Greg was always true fun and an adventure which often included spending hours glassing what seemed like barren hillsides and then spotting a reflection off of a mule deer’s wet nose or antler, spotting the shadow of deer’s antlers and ears on a boulder or rimrock.  Other times it was taking a Burnham Brothers Long Range C-3 Predator Call and blowing it until out of breath then having a herd of mule deer does and fawns charge in, and occasionally a sizeable split back tines buck of great interest.

My most recent hunt was with Greg on property where he took a buck he called “Hank” which is the largest non-typical of the crooki subspecies (desert mule deer) ever taken according to the Boone & Crockett record book.  On that hunt I was able to take an ancient 2 x 3 with brow-tines buck.  I took that buck with a gorgeously stocked limited Joe D. Clayton, Ruger No. 1 chambered in .280 Ackely Improved, topped with a Trijicon AccuPoint scope and shooting Hornady’s Precision Hunter ammo.  I mention what I used because that’s exactly what I intend to again use this coming hunting season when I again pursue desert mule deer.

If you are not already under the spell of desert mule deer..don’t even think about getting started. For if you do, you’ll be hooked, as I am, for life! 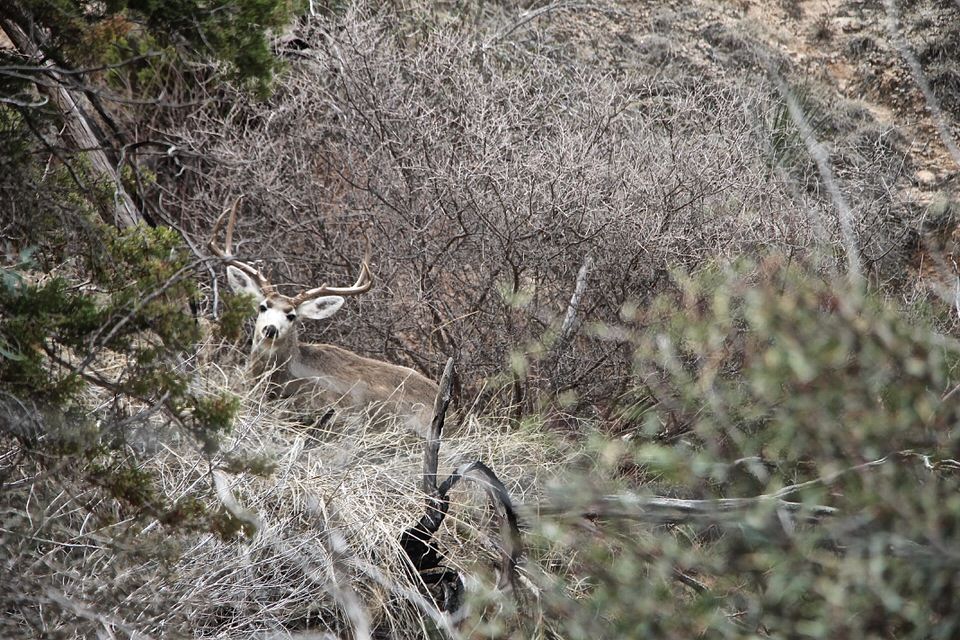