Experience is sometimes a harsh teacher.

One August morning I promised to my parents I would be home by breakfast to start my chores of feeding our animals before it got too hot. I ran to woods behind our home and was watching a trail leading to a waterhole. I spotted movement, a young four-point followed by a bigger four-point.  A third buck appeared back in the brush.  Like the other two, he was still in velvet.  He wore the biggest antlers I had ever seen and I already was 8-years old!  My heart beat at an alarming rate.

I dearly wished I had binoculars such as I had read about in hunting magazines to I see the big buck, up closer!  Even so I could count fourteen fuzzy points.  His beams spread to just beyond the tips of his erect ears as he looked for the source of noise which I suspected was my beating heart.  The big buck and the two others disappeared into the oaks.

When they disappeared I ran home.  I could not wait to tell my Mom and Dad what I had seen!  I hoped they would believe me.

I started hunting squirrels with my grandfather and dad while still in diapers.  When I was six my dad let me hunt deer alone using a .22 single-shot, legal back then.  I dearly loved deer hunting even though those early years I seldom saw any

Fast forward to the hunting season after I seeing the big buck.  Opening morning I crawled into my tree at 4:30 am.   Two and half hours later, I saw movement coming my way through tall bluestem.  It was the big buck from August.  I started shaking, buck fever!  I gripped my the 12-gauge shotgun and prayed the buck would keep coming my way.  He was slowly closing the distance.  When the buck was still 75-yards away, I felt the wind shift to blowing across my back.  The monstrous buck stopped, raised high his nose, snorted, turned and walked away.  That was the last time I saw him.  Where he went or what happened to him I have no idea.

I learned two very valuable lessons that morning. Deer use their nose to avoid encounters with hunters, and, I needed a “real deer rifle”. 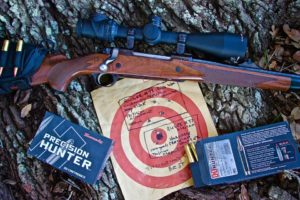 It took me years to take a whitetail of that buck’s equal. But I did not forget the lessons he taught me.  Through hauling hay and working cattle I finally earned money to buy a “real deer rifle”, a used bolt-action .257 Roberts.  A couple years later I bought a Ruger Model 77 in 7×57.  More Rugers followed.

After over 60-years of hunting am still learning about whitetails. Today I hunt exclusively with Ruger’s single-shot and bolt action rifles topped with Trijicon scopes and shoot Hornady ammo. I consider the combination the best!