An icy north wind, blocked by the blind we were in, accentuated the unseasonal 8-degree morning temperature.  I was thankful I was “layered up” with Sitka Gear. “Gotta feeling the deer are not going to start moving until after sun up.” I commented to Justin Wegner, my cameraman.

An hour before a hint of gray, Craig Archer, Hargrove Ranches’ (www.hargrovehunts.com) manager and his brother David had dropped us off.  In daylight the raised blind would allow view of the food plot, scattered trees and brush, behind was a huge expanse of shin oak.   I had hunted this area the previous year.  We had seen several nice bucks.  I hoped those, now a year older, bucks might put in an appearance.

In darkness I reflected upon our hunt.  After making certain my Ruger No. in .300 PRC, topped with a Trijicon AccuPoint scope, shooting Hornady’s Precision Hunter 212-grain ELD-X was still sighted-in, we spent time driving the several thousand-acre ranch, on the west traversed by the Double Mountain Fork of the Brazos with its deep cuts and ravines and the eastern part, basically sand and shin oak. We had seen numerous good bucks, both whitetail and mule deer, and wild hogs.  One morning, I rattled, knowing it was a bit early to do so. Alas all I attracted were five cows and one coyote.

Near legal shooting time we spotted several does and a small buck on the planted wheat.  Time passed slowly. Just past sun-up, obscured by clouds, we saw a deer coming from the far right.  A good buck!  Nine long points!  Twenty-inch outside spread!  He strode toward the does.  No doubt he was mature buck!  I got the Trijicon’s crosshairs on him, grunted loudly.  The buck stopped, I pulled the trigger.  He dropped in his tracks. 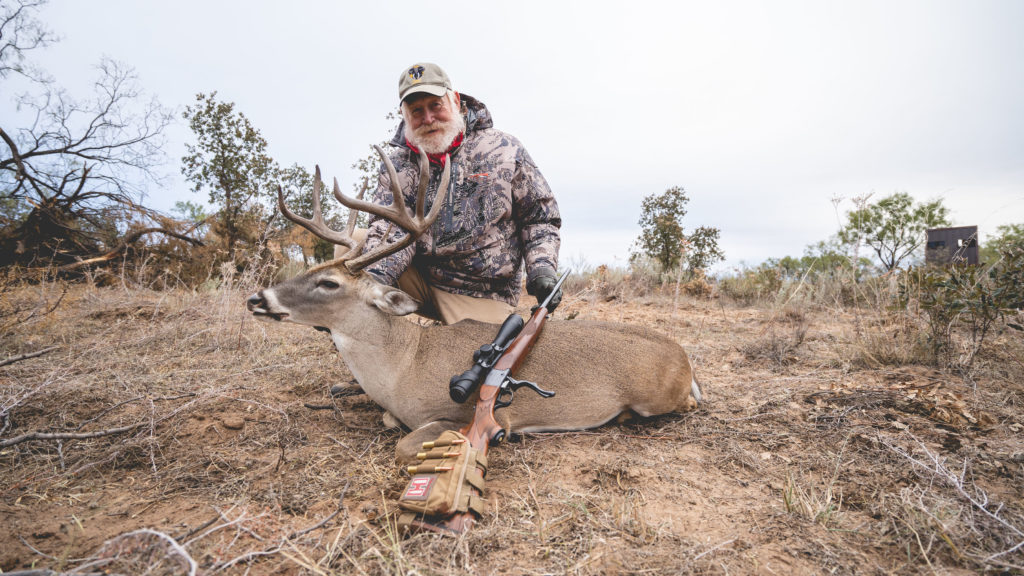 A couple of days later having taken care of the excellent venison, thanks to the deer subsisting primarily on forbs, I dropped head and cape at Double Nickle Taxidermy.  But not before making plans to hunt the Hargrove Ranches again next year.